In 2013 on March 22, in Vologda, under the leadership of Shulyev Dmitry and Kurbatova Svetlana the circus “Kreativ”, in which more than 30 children of 5 years old and over are engaged, was created. The collective works from Vologda creative studio of children and youth but the circus trainings are held in school No. 6 in village Molochnoe. Our studio actively participates in concerts and competitions of various level in Vologda.

Now circus “Kreativ” offers the performances in show-programs in our country and abroad! 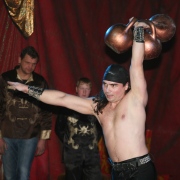 The founder of the circus studio “Creative”.